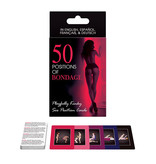 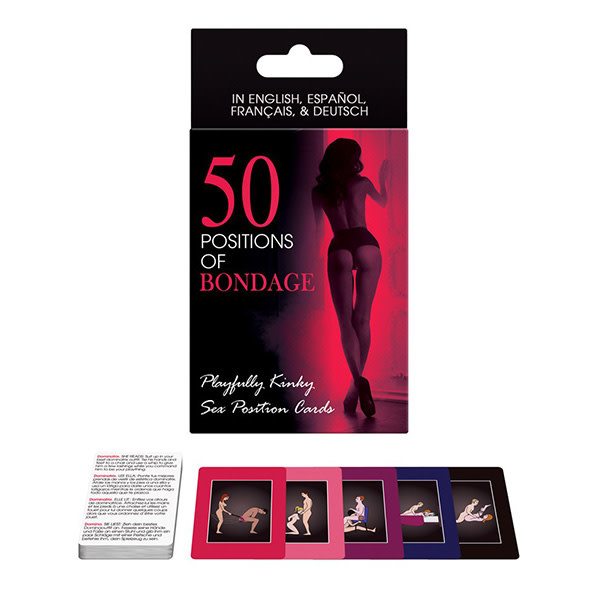 Playfully kinky sex position cards! Compete against your lover to build a five-card fantasy that includes five categories of bondage position challenges. The cards can also be used as flash cards for ideas of sex positions you can experiment with that incorporate bondage.

Game Rules:
Shuffle the cards and deal five cards to each player. Place the rest of the deck in the center of the table with the picture sides facing down. Players take turns drawing cards and after a card is drawn, the player decides to replace a card in their hand or discard the new card, keeping five cards in their hand after every turn. Discarded cards should be placed face up next to the deck and the next player either selects the top discard or a new card from the deck. When a player has a complete fantasy in their hand, they can lay it down and thereby wins the game. A complete fantasy must have one card of each colour. The couple then acts out the cards in order of colour: red, pink, purple, blue, and black.

Interpret the cards to figure out how you can carry them out with the supplies you have. Restraints, paddles, and collar & leash can be substituted with robe ties, scarves, rulers, belts, etc. Be creative - but safe! Each person should designate a safe word, or gesture when gagged, that requires the other player to stop when used. 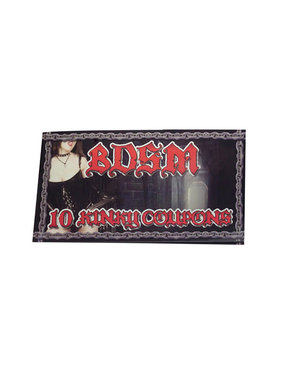